For Belmont’s Maddie Babcock, the pool is ‘the one place where I don’t feel blind’

When Belmont’s Maddie Babcock is churning up chlorine in the 50-yard freestyle and 100 breaststroke at Friday’s Division 2 state championship meet, her mother, Jill, and coach, Doug Curtin, will be positioned at each end of the pool.

They’ll both be designated “tappers,” holding telescoping metal rods with buoys attached at the end. As Babcock approaches the wall, the tappers will touch the senior swimmer with the buoy to let her know it’s time for a flip turn. Maddie’s trusted service dog, Enzo the yellow Labrador Retriever, will be nestled within the Belmont team on the pool deck at Boston Sports Institute in Wellesley. Enzo doesn’t like the water. Babcock can’t get enough of it.

Babcock is legally blind. She has a condition called aniridia, a rare genetic eye disorder in which the colored part of the eye, the iris, is gone. Babcock only has limited light perception in her right eye, and her left eye can only perceive large shapes and colors.

When Babcock steps to the block Friday, she’ll be the third adaptive swimmer (i.e. a swimmer with a visual or mobility impairment) ever to compete at a Massachusetts Interscholastic Athletic Association state competition. In doing so, she’ll be an advocate for future adaptive athletes, continuing her quest to qualify for the 2024 Paralympics in Paris.
“It’s cool when people see me race, or see me practicing and may not know that I’m blind,” said Babcock, who recognizes she might be the first blind person most strangers have ever met. “Just because I have a disability doesn’t mean I can’t swim and be part of my high school team. 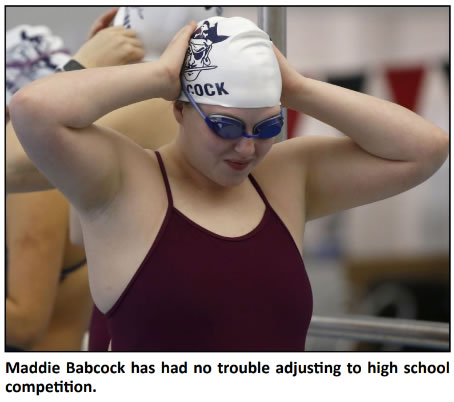 “It’s kind of like if you were looking through milk,” Babcock said of her vision.

Babcock grew up with a pool in her backyard, and started swimming as a toddler. Swimming provided a safe, competitive environment where Babcock didn’t require major assistance. She joined the Belmont Aquatics club team at age 7.

“I fell in love with the water,” Babcock said. “It’s the one place where I don’t feel blind.”

Most adaptive swimmers require their own lanes. Babcock does not. That made for an easy transition to the high school team at Belmont.

Babcock’s mother says her daughter is thrilled to swim alongside her classmates.
“Maddie has gained so much from being on the high school team,” Jill Babcock said. “The socialization is the best part . . . It’s not, ‘Maddie’s blind.’ It’s just Maddie.”

Belmont senior captain Alexandra Zarkadas has known Babcock since their days together at Wellington Elementary School. From navigating schoolwork to relays, Zarkadas says Babcock’s resilience and confidence has been inspiring.
“I’ve always really admired how Maddie goes about her day,” Zarkadas said. “I’ve always really looked up to her. I find it really amazing that she’s able to swim.”

Since she was 12, Babcock has been attending weekly sessions with Adaptive Sports New England, a nonprofit organization dedicated to increasing participation in sports for youth with visual or mobility impairments. The organization was founded by Joe Walsh, a two-time Paralympian in cross-country skiing and former Managing Director of Paralympics for the United States Olympic Committee.

Almost every weekend, Babcock teams with her two Paralympic coaches. Michael Prout, now the women’s swimming coach at Simmons University, won two medals, including a gold, at the 2004 Paralympic Games in Athens. Anna Johannes won a bronze medal in the 2012 Paralympic Games in London.
“They know what it’s like swimming with a disability, and they’ve been teammates with swimmers who are blind,” Babcock said.
Walsh started Adaptive Sports New England in 2013. He, too, is visually impaired.

While high school practices are great, much of the teaching happens through a “watch and learn” approach. Girls such as Babcock need different instruction, like having a coach show her a motion by moving her arm for her.

“It’s easy for her not to get as much benefit out of a [high school] practice as her peers do,” said Walsh, a Braintree native.
Walsh approached the MIAA in 2013 with a proposal for an adaptive program. He drew on his Paralympic experience to craft standards for sectional and state qualification for adaptive swimmers in three events: the 50 freestyle, 100 freestyle, and 100 breaststroke.
“It was not a hard sell, but it was important to create the structure,” Walsh said.

Adaptive athletes can qualify for open competition in other events if they achieve the qualifying times. The adaptive program, however, gives athletes such as Babcock a better chance to compete in the postseason.
Before Babcock, Cailin Currie, a 2017 Essex Tech grad and Elise Morley, a 2019 grad of Norton High, competed as adaptive swimmers at states. Currie swam at the 2016 Paralympics in Rio de Janeiro and the Tokyo Games this summer, and Morely has represented Team USA in the Parapan American Games.

While Babcock has a dream of competing for Team USA in the Paralympics, she has plenty more goals to accomplish in the short term. She hopes to swim at the varsity level in college while getting a degree in sociology. After that, she’ll take aim at law school, hoping to become an attorney that specializes in disability rights.

Before all that, however, she’ll be on the blocks Friday, competing with her peers at the state level. While it’s just another race for a veteran swimmer, Babcock knows she has a platform to help show what adaptive athletes can achieve.
“We don’t really focus a lot in society about how disabled people can do the same things [as everyone else],” Babcock said. “It’s kind of a cool opportunity that I have.”